From the Head Gardener

August in the gardens.

What extremely hot weather we had in July. A lot of the team’s gardening time was taken up watering plants in pots (especially the tomatoes, cucumbers and peppers in the greenhouse). Shading would be useful although we don’t have any in place here now. A good way to create humidity and bring down the temperature in the greenhouse is to soak hard surfaces such as paths and staging every so often during very hot temperatures. This can be done whilst watering the plants. After damping down, the water evaporates, increasing the moisture level of the air. This also helps cope with pests that thrive in dry conditions, such as red spider mite.

You can aid fruit set on the tomatoes by gently shaking the stems or the canes supporting the tomatoes now and again. Tomatoes are mostly self-pollenated so gently shaking them helps loosen the pollen, this drops from the anthers to the pistil in each flower. Wind helps to do this naturally in the open by vibrating the flowers ensuring the pollen loosens and falls.

In the borders the team have been hoeing around the plants to slice through or loosen the weeds. In the hot dry weather, they soon shrivel and die. Unlike in damp soil where they root again. The Wine Eyed Jill Dahlias are look particularly good this year.

The Albertine rose on the arches as you walk up The Laskett drive have also looked lovely this year, as have most of the roses in the garden, regular deadheading keeps them looking good.

Philip, Shaun and Shane at The Laskett Gardens 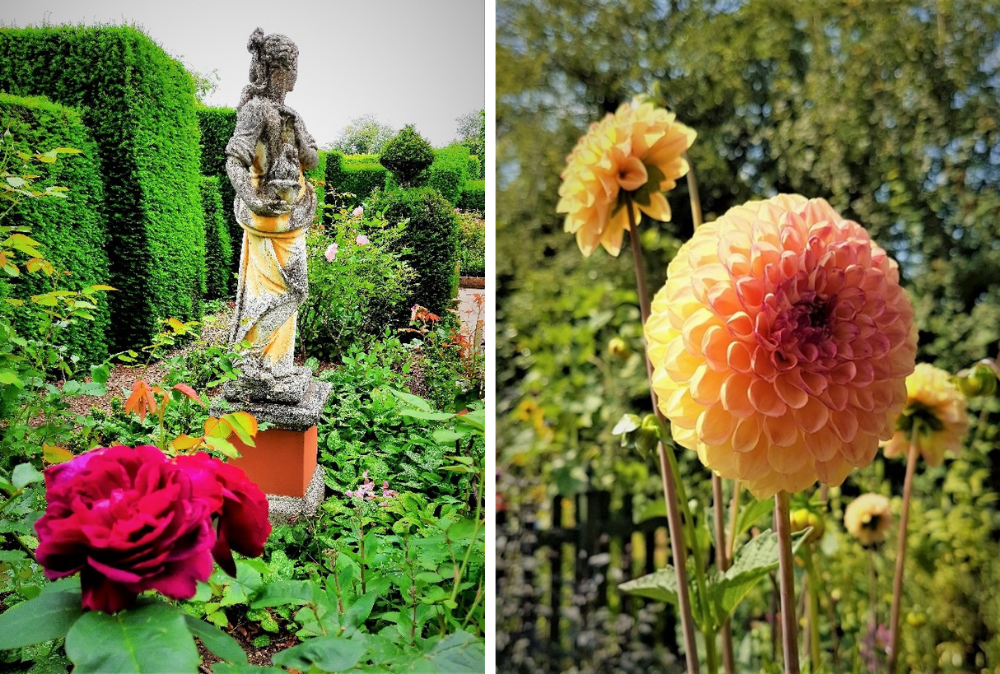 Summer’s set to make a grand entrance at The Laskett.

Moving into the summer months the garden is really starting to look fantastic. The Rose Garden starts to bloom and fills the garden with a heady scent. Plus there are some wonderful Astrantia flowers called Shaggy that look fabulous. Most of the box topiary has been clipped and is looking nice and sharp.

In winter it is all about the structure with the hedging and topiary giving the garden it’s form. But at this time of year, you have it as a backdrop to the flowers including the Irises, Delphiniums, red Geum, and Lupins. The view from the Belvedere is phenomenal with the pops of colour from the flowers throughout  the garden and the Gloucestershire countryside in the distance.

Over the last month we have had sunny, sometimes hot days, but cold and mostly frosty nights here in Herefordshire. A lot of perennials and shrubs have had the first flush of the season’s growth burnt off by the frosts. Some box topiary and hedging have had the newer shoots caught. The magnolia flowers were looking brown and sludgy instead of their usual vibrant colours. Luckily, the blooms that were not open during the coldest of the frosty nights are looking a bit better. The greenhouse is still full of plants that would love to go outside now if it were not for the cold and frosty nights. As well as the frosts it has been very dry. We do not usually have to water too much during April, but new plantings especially have needed watering daily.

We have been cutting the grass for a while now. The first couple of cuts with the mower blades set higher than usual, then gradually reduced to the setting required as the season progresses. We have been topping up the gravel paths and keeping a close eye on the borders for those early weeds, bittercress, dandelions etc’, also looking for those border spaces that we can fill with a new plant or split and divide a clump that is already there to make the clump larger.

The yew topiary is cut and looking sharp and the beech hedges are now leafing up. Apple blossom in the Christmas Orchard and seeds germinating in the vegetable garden, the growing season is really getting going now.

A new season and a new beginning

What a change! Sir Roy moved to his new house at the end of 2020 and Perennial have taken over the running of The Laskett.

Winter has ended, hopefully, just as the trees, shrubs and plants expected. The birds and other wildlife are busy getting on with their normal springtime routines and the dawn chorus is getting louder and better each day. All the plants are waking up, the perennials are bursting into life and the buds are fattening up on the trees and shrubs. It’s such an inspirational time of the year.

There are many brave plants that flowered during the winter, and it’s sad to say goodbye to them for another year. One of the most beautiful was the Snowdrops. On a cold bleak day they were there, standing up bravely to all the elements and bringing a smile to our faces. However, if you are lucky enough to have a few different varieties of Snowdrops, the flowering period can last up to three months.

We have had the Hamamelis (Witch Hazel), Sarcococca (sweet box), the Daphnes with their heady fragrance and one of our favourites, the Mahonia. With all of these, you can get lost in their fantastic scents.

The beauty in the garden, is when one thing finishes flowering, something else takes its place. If it’s not the flowers it could be beautiful foliage or striking stem colour.

We are preparing the garden for visitors as we normally would, pressure washing any paths and walkways that have become slippery or dirty, tidying the borders and the hedges, clipping the larger yew and holly topiary specimens and getting the water features running. There is still box topiary to clip. We will wait until late April / May. Some visitors might comment that we should not be clipping the box until Derby day (5th of June), but if we leave it too late it will not all get clipped, so fingers crossed there are not any hard frosts after clipping.

All we know is there is nothing more amazing and beautiful than your own garden. If it’s big or small, it’s there for you to step into and lose yourself from the busy world, if only for a short time.

Have fun and be inspired.

Philip and Shaun, the garden team at The Laskett